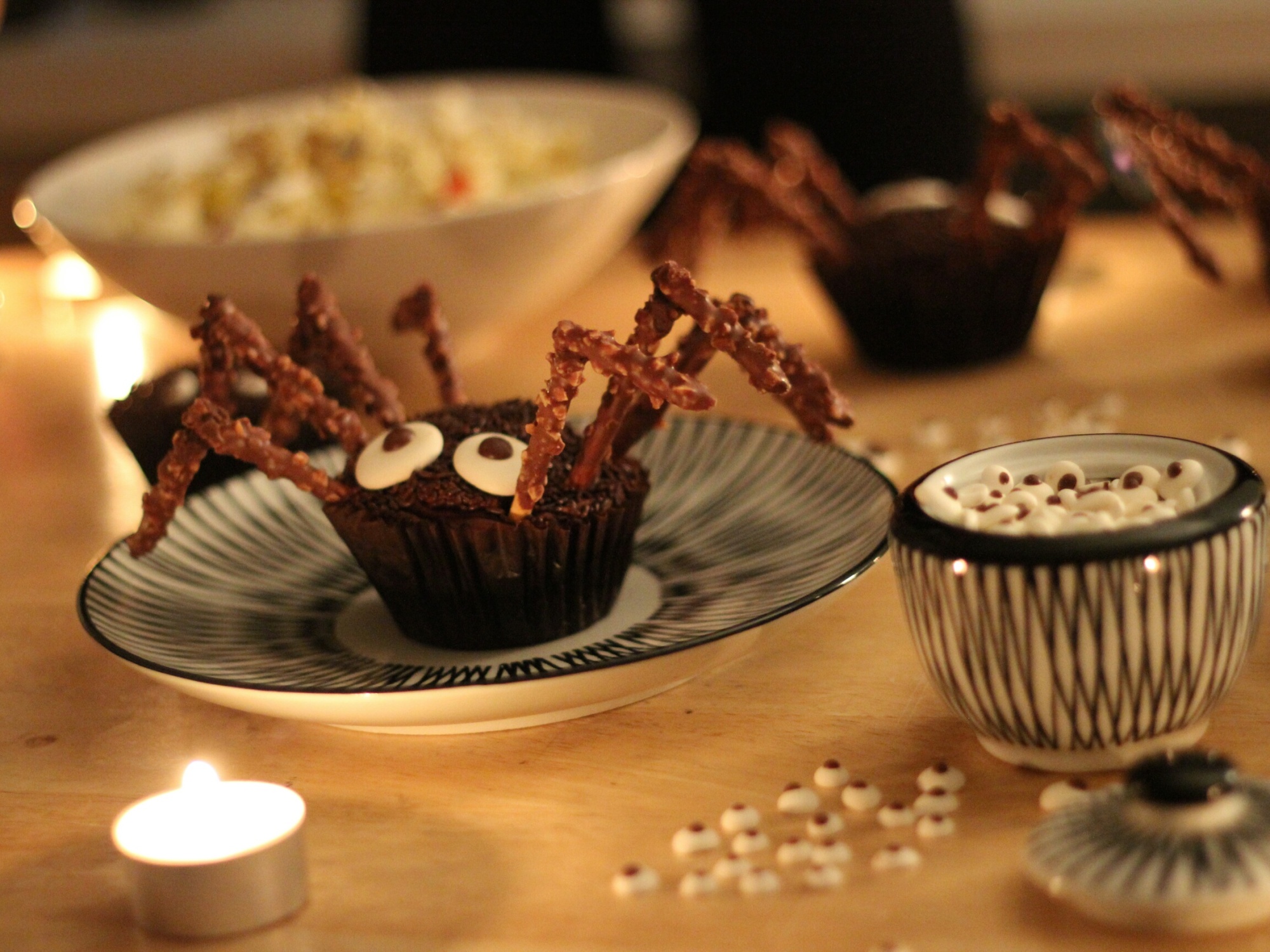 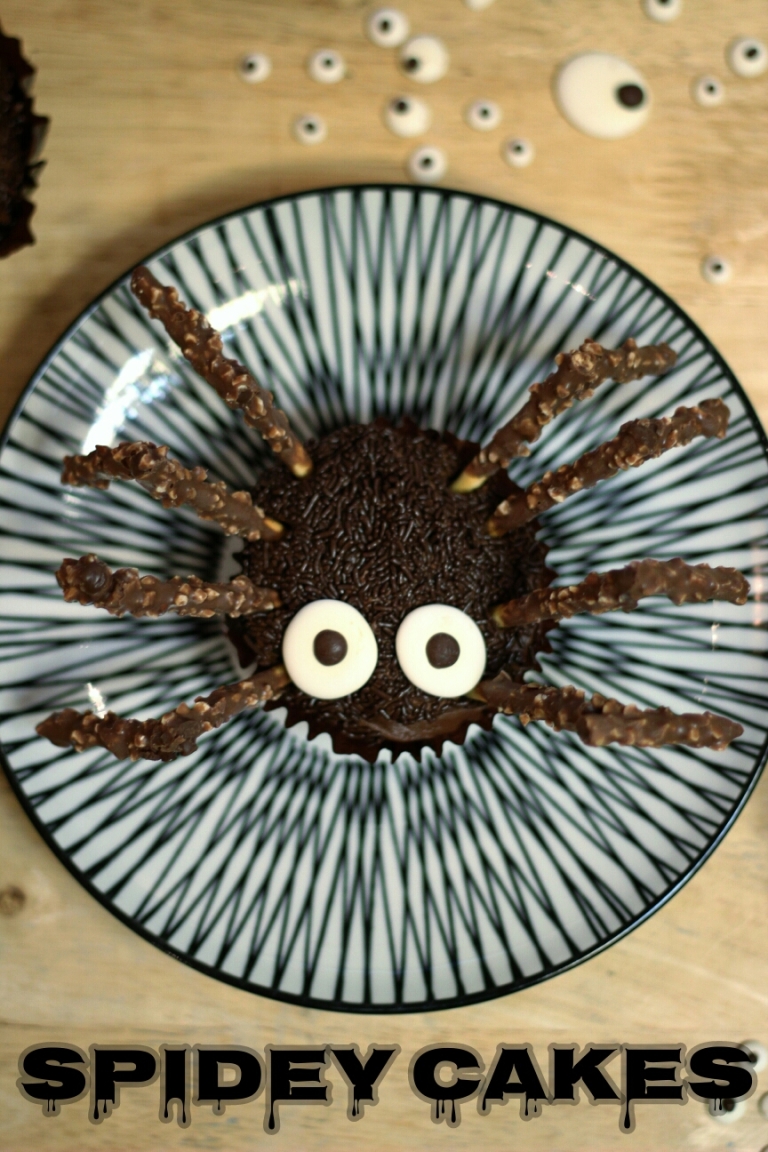 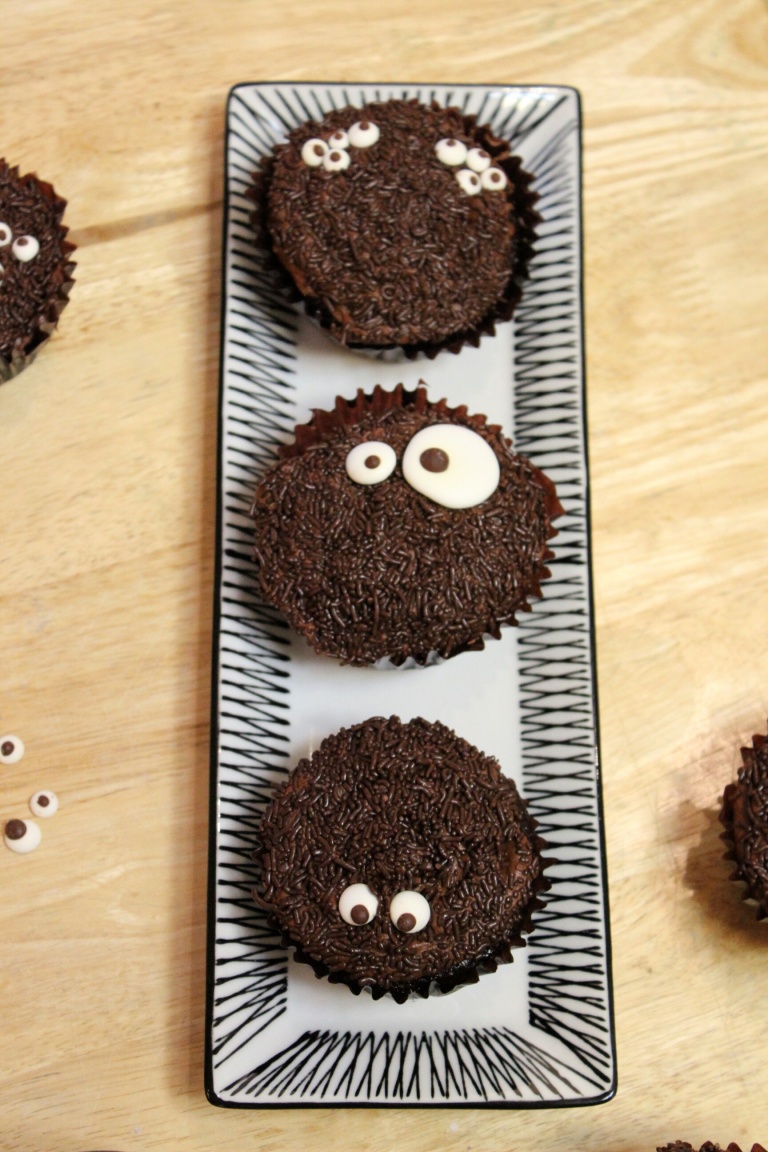 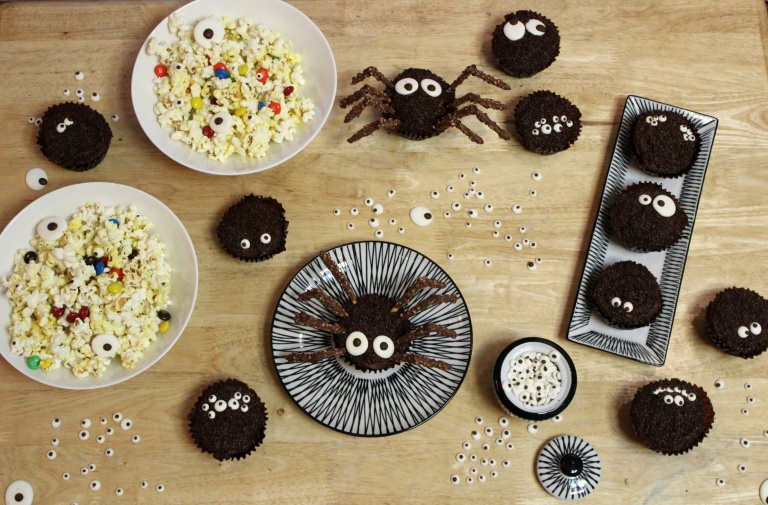 Every year for Halloween (with the exception of a few years missed), I bake “Spidey Cakes.” I intend for it to be a Halloween tradition. However, in the past, I have always baked Ina Garten’s chocolate lava cakes & slapped a little store bought icing on top. Nothin’ wrong with that! Delicious is delicious.

However, the big problem is that the lava cakes are of course, made to be soft in the middle so that the melted chocolate center flows like lava. Not exactly easy to ice over & decorate. I just really wanted to bake those lava cakes the first year I decided to make these & continued with it thereafter.

The great thing about traditions, in my view, is that they offer the room for change & challenge with the comforts of a constant. If I continue to bake my “spidey cakes” each year, I have a tradition I can always look forward to & count on. But just because it’s a tradition doesn’t mean it always has to be the same. Not exactly, anyway. The way I see it, this is an opportunity for me to try out a new chocolate cupcake recipe each year. And it’s time to start making my own buttercream for this one. So, this year, I mixed & matched some new recipes. Those lava cakes will have to wait for another occasion.

I also chose to change up the decorations. In the past I have always done chocolate on chocolate, with brown or black sprinkles. The sprinkles give the spiders an extra creepy texture. For the eyes, I used red M&Ms & for the legs, chocolate twizzlers. This year, I got a little more creative.

I still used the black sprinkles. But for the eyes, I made my own googly eyes with royal icing & the same choco pens I gave my students for their ghost cookies. And for the legs, I used Almond Pepero. 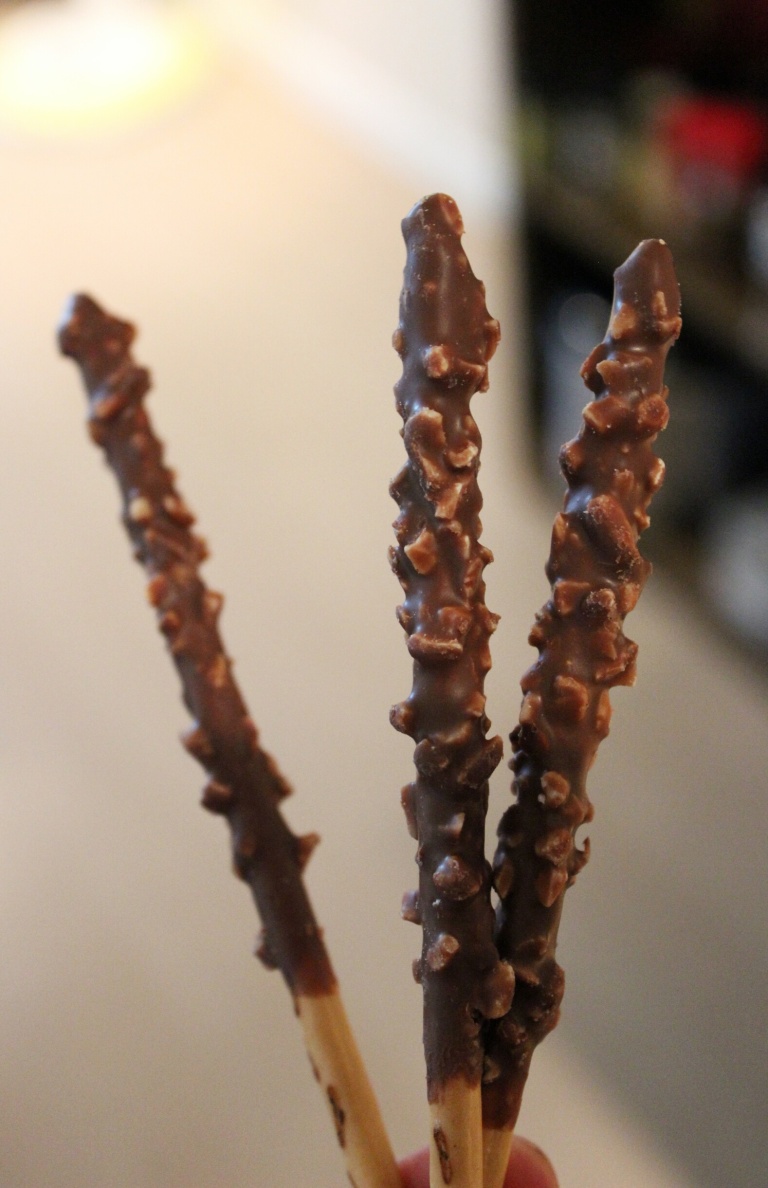 Pepero is like a chocolate covered pretzel stick sometimes with nuts & other variations. It’s so popular in Korea, it has its own holiday. 11/11 is Pepero Day because Pepero resembles these numbers. It’s a day to give everyone you know boxes of Pepero in all its variations. Usually the halls in our classrooms & sidewalks are just littered with pepero crumbs and boxes on this day. It’s a great marketing strategy on behalf of the people behind Pepero! 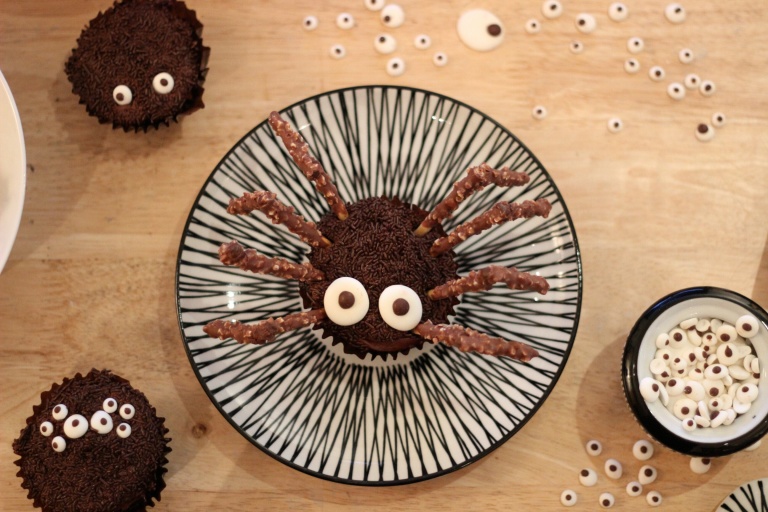 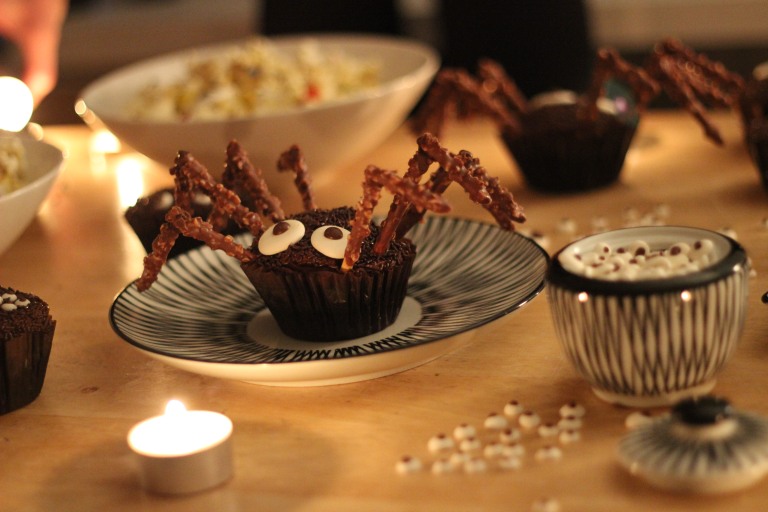 For our spidey cakes, Almond Pepero were Mr. FGK’s idea & they were an awesome choice. They look spindly & lumpy enough to just be creepy…without losing the googly eyed cuteness, of course. When you are shopping for Pepero, they should be easy to find in International, Asian, or Korean Marts but also, I have seen Pepero’s competitor brand Pocky in many chain grocery stores in the States.

Here is a step my step tutorial to decorating your own Spidey Cakes: 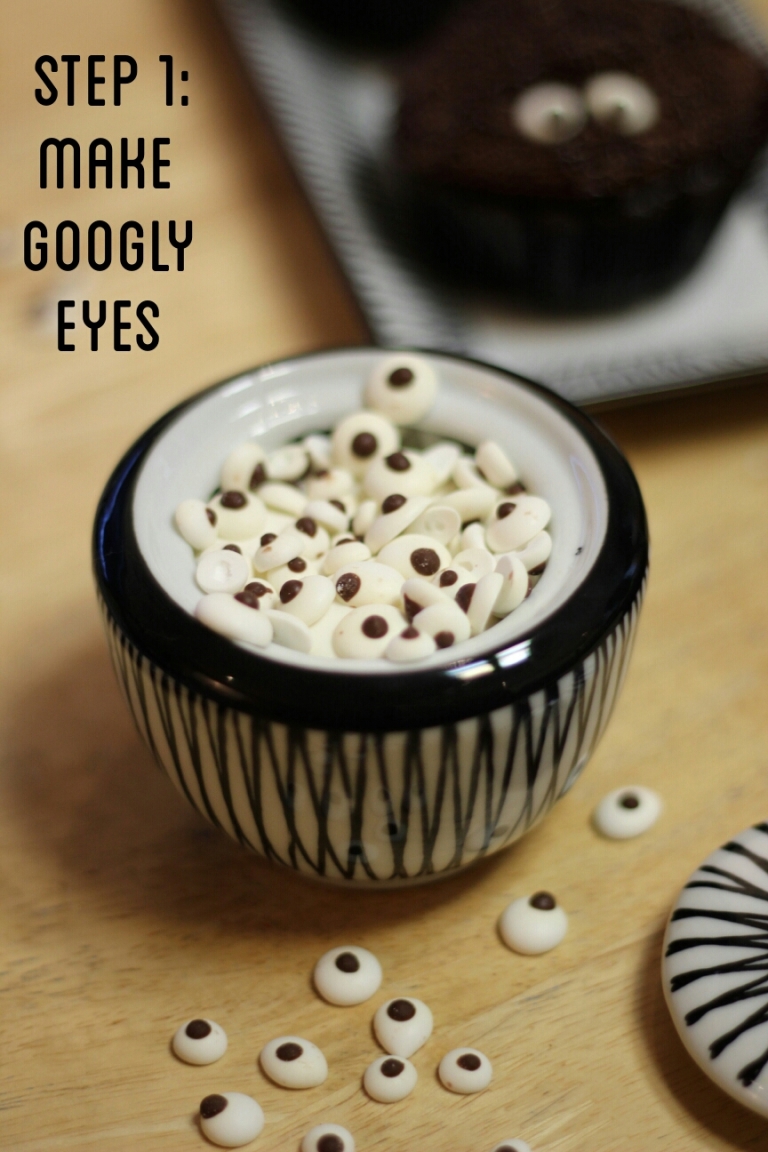 *You will need to let the eyes dry overnight.*

These can be made well before the cupcakes. I made mine a week before and they were fine.

This is super easy to do. Make a batch of royal icing (recipe below) & put it in a piping bag. If you, like me, don’t have a piping bag or tips, just use a ziplock bag. Just cut off a tiny bit of one corner of the ziplock bag. Pipe small dots of the royal icing out on parchment paper. I tried all different shapes & sizes so I had more options once I began decorating my spiders. Then using a “choco pen,” or the rest of the royal icing blended with brown food coloring, pipe small dots on top of the whites. Let them dry overnight. Save the rest of the choco pen or royal icing for the legs. 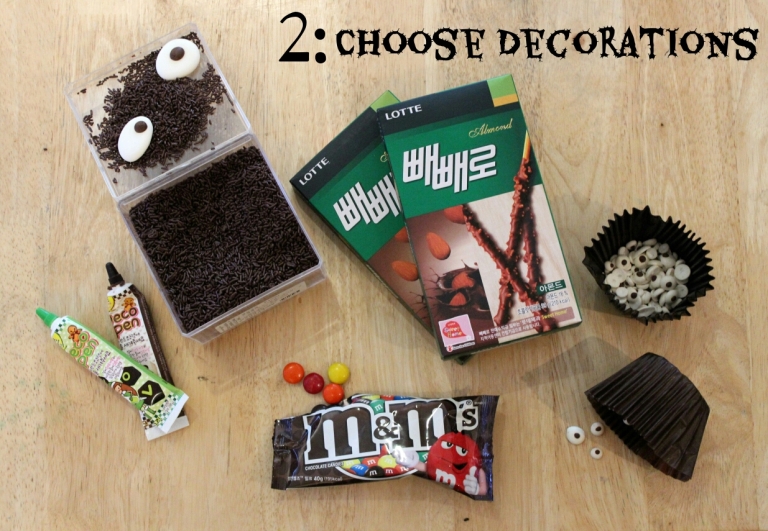 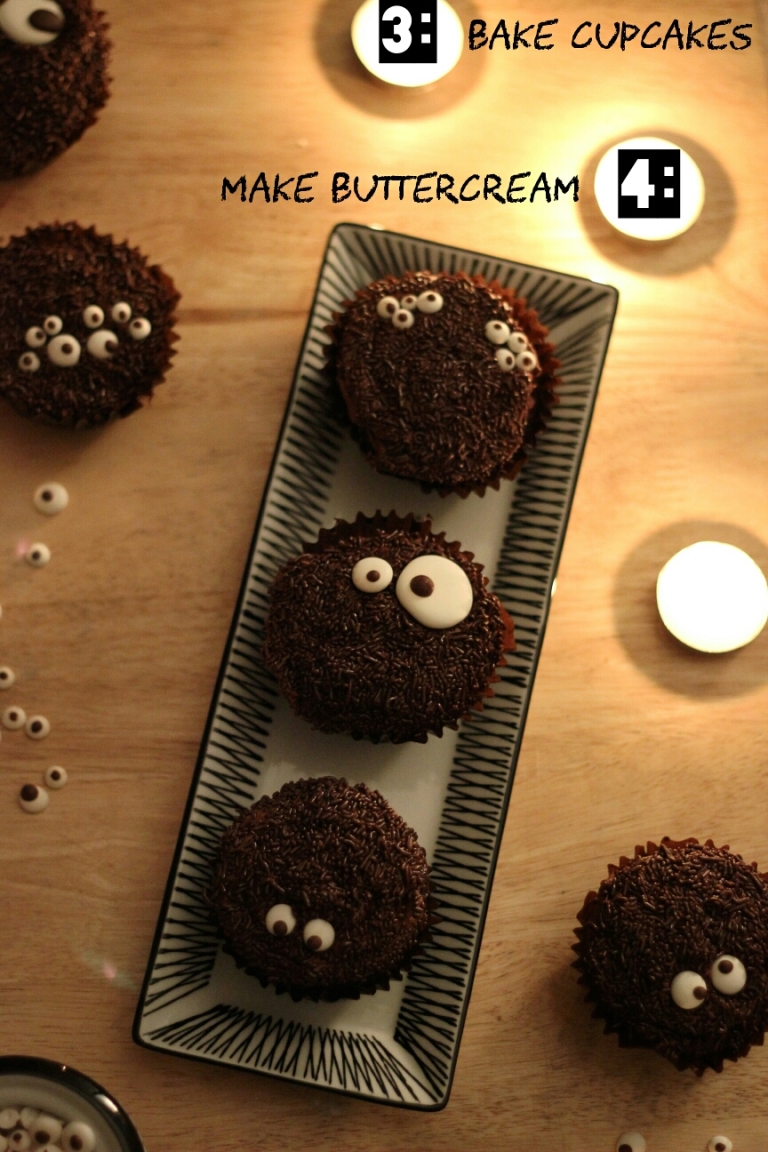 As I wrote earlier, this is a chance to try new recipes. Or use your favorite tried & true chocolate cupcake recipes. I do recommend chocolate on chocolate as some of the icing might peek through the sprinkles. Also, there is no such thing as too much chocolate. That just doesn’t exist.

For mine, I mixed & matched recipes from two of my favorite blogging bakers: Sally’s Baking Addiction & Sprinkle Bakes. I used Sally’s Dark Chocolate Buttercream & Heather’s Coca-Cola Cupcakes. This is a delectable combination. So rich, so chocolaty & I was so in heaven! 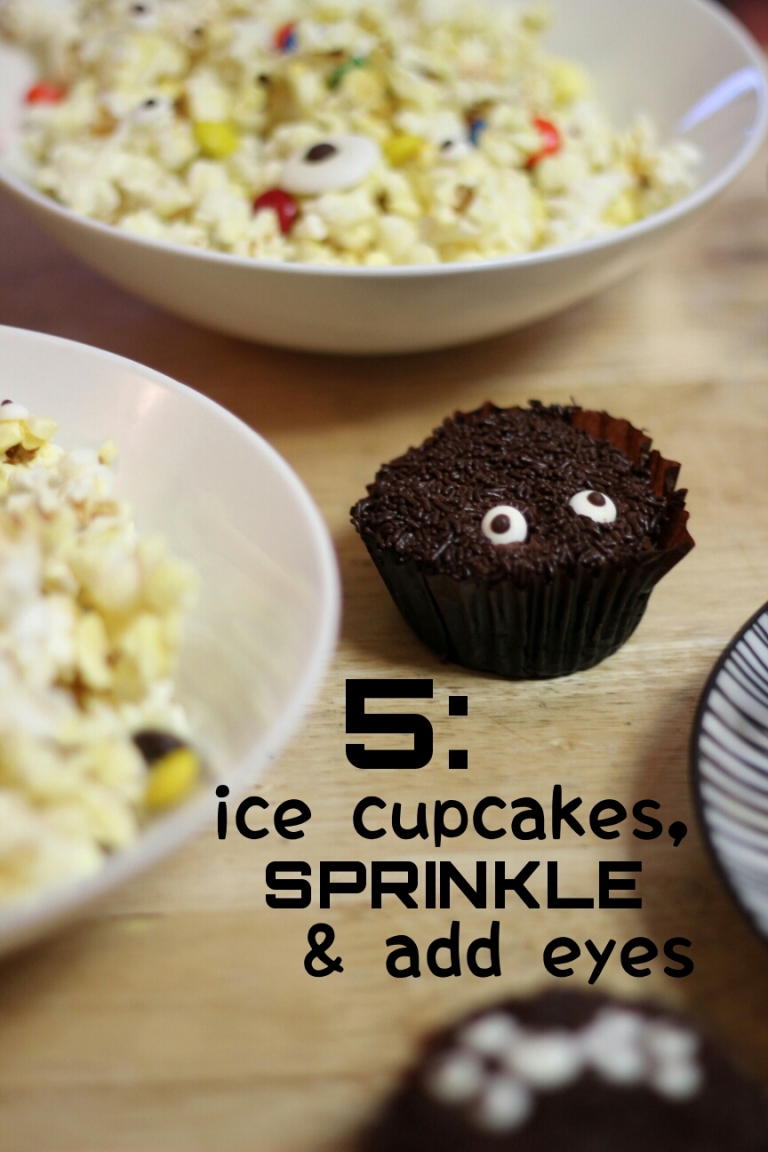 Once your cupcakes have baked & cooled, smother them with your choice of chocolate icing. Then roll the tops in brown sprinkles. The sprinkles will stick right onto the icing. Next add eyes however you’d like. I had lots of fun choosing a different set of eyes for each of mine. Some had 8 eyes in different patterns. Some had really large googly eyes that crossed. You get the idea! 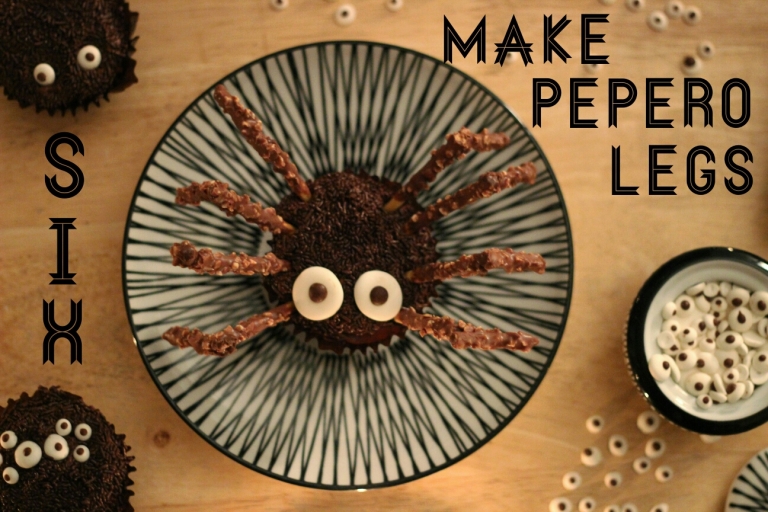 Lastly, you will need to give them legs. I chose to only give two of mine legs this time. They were the mommy & daddy spiders & the rest without legs were their babies…or fuzzy monsters. I could see the ones without legs done in different colored sprinkles as monsters.

For the legs, break each Pepero stick in two at about 3/4 of the length. The portion of the Pepero that is not dipped in chocolate should be the longer portion. Using your remaining royal icing or “choco pen”, attach the two portions so the legs appear bent. Lay them out on parchment paper to dry. They should need about 10 minutes to dry. If it is very hot in your kitchen, you might want to put them in the fridge during this time so they harden. Cover the exposed part of the broken Pepero with a little brown royal icing or choco pen so that it blends in. Then stick the undipped portion of the Pepero in the cupcake. Ta-da! Really creepy, right? 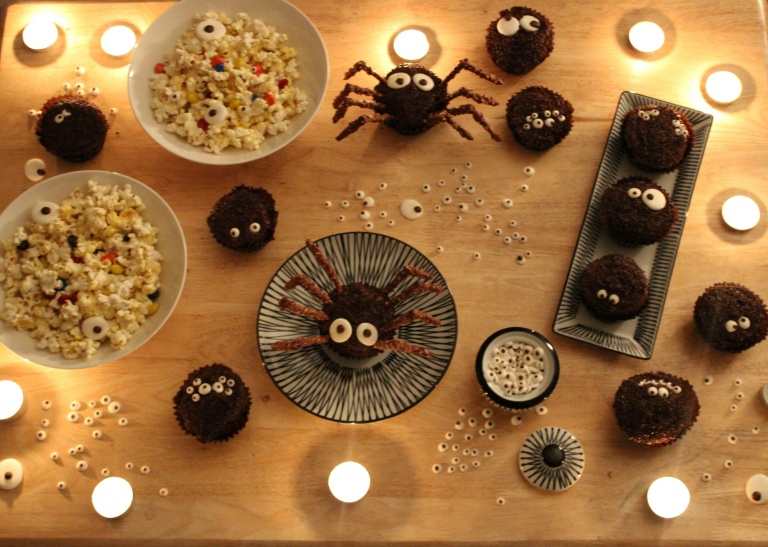 Combine the egg whites & powdered sugar in a mixing bowl. Using a mixer, blend the two adding 1/8 tsp of water as needed. For mine I only needed 1/8 teaspoon. Just make sure the consistency is thick & not runny.

Blend until the icing is thick, about 10 minutes. To check that it is finished, dip a spoon in & let the icing drop from the spoon back into the bowl If it disappears & blends in within a few seconds, it’s ready.