“Well Being” is a widely used marketing term in South Korea. It could be compared to “organic,” “artisan” or “superfood” in the west. The term is splattered across products, restaurant menus & supermarkets automatically increasing the desirableness & prices of these products. Even non-edible products are also marketed as having qualities that could equal “well being.” There are “well being” face masks, lotions & soaps. In addition to this, there are even pizzas, burgers & wine-soju marketed as offering “well being.” 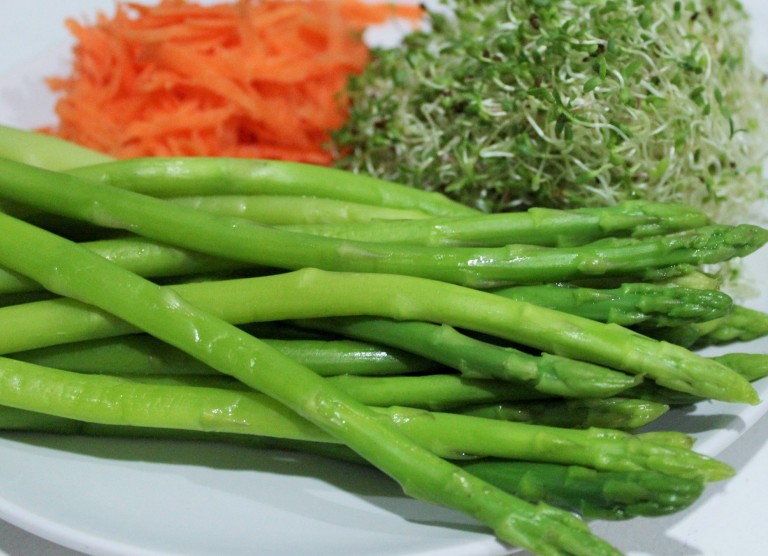 So totally California! So radically 90s! 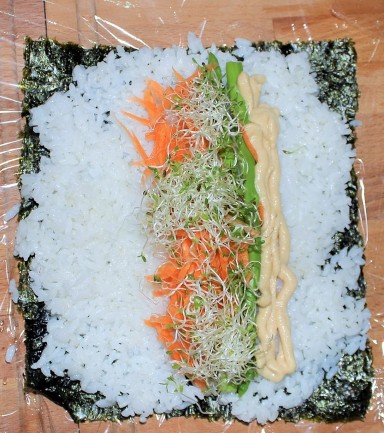 Both of these are sure to help your “well being” as they’re chock full of veg: asparagus, carrots & alfalfa sprouts in one; cucumber, celery & wheatgrass in the other. Both have hummus! So treat your “well being.”

This is the last of my kimbap recipes for now. Check out the rest listed below:

Also, check back tomorrow for how to use up all the leftover veg you’ll have from making these kimbaps!

For both Variations you will need:

Prepare the vegetables & rice. Put the hummus in a piping bag or a ziplock bag. If using a ziplock bag, push the hummus to one corner & twist the empty end. Snip a small portion of the corner so that the hummus can be piped out.

To assemble the kimbap, lay one piece of the dried seaweed on a long strip of saran wrap or a bamboo mat. Press about 3/4 cup of the rice onto the seaweed covering the entire sheet. Lay the vegetables in the center of the rice. Pipe some hummus over the veg. Using the saran wrap or bamboo mat, begin to lift one side of the seaweed over the ingredients. Tuck it tightly & continue to roll sealing it tightly. Brush sesame oil over the top of the roll then slice into 1/2 inch size pieces.

One thought on “Well Being Kimbap”