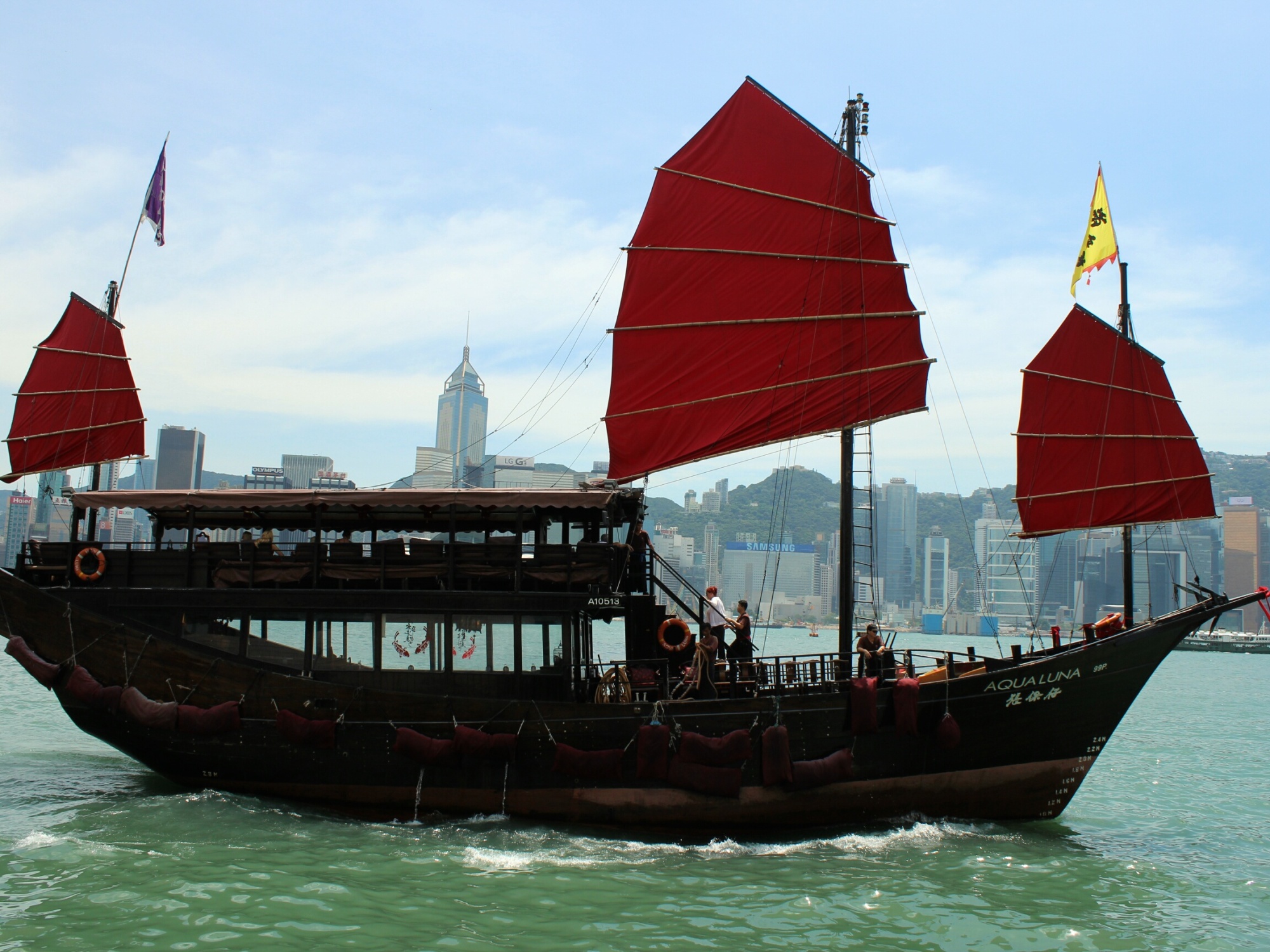 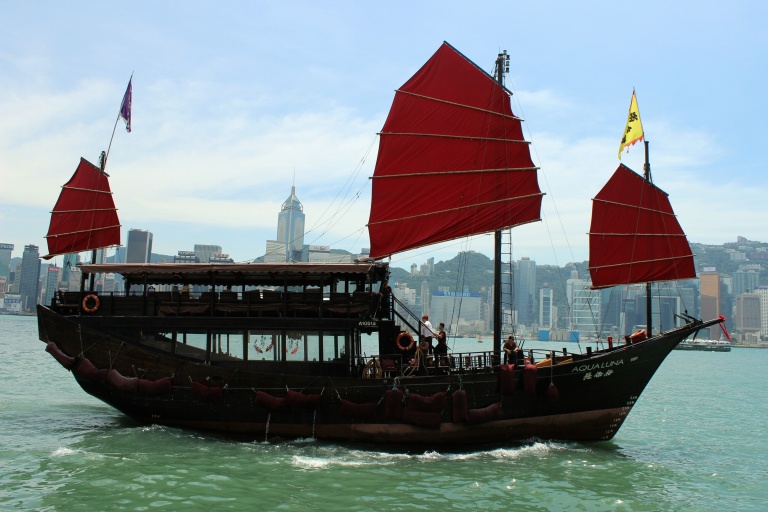 Where to begin? This was one fun trip! As mentioned in Hong Kong – Sneak Peek, Mr. FGK & I just took a trip. We were in Hong Kong for 5 days & 4 nights of fun-filled, site seeing, expat shopping, sweaty touristing & indulgent food excursions. 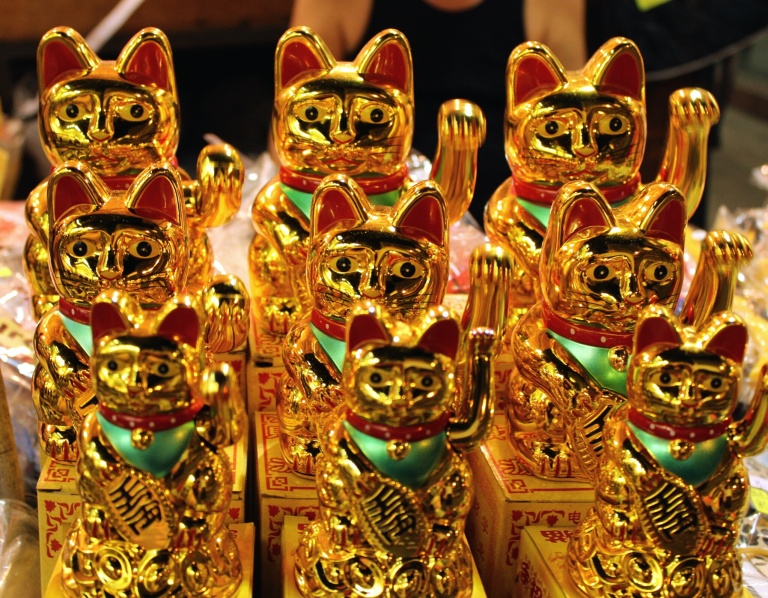 So, as you can see from this list, we were some sweaty tourists. But more than all of this, we saw rolling mountains covered in tropical greens, skyscrapers & neon lights nestled in between & a hugely diverse population of people from all walks of life co-existing in these small & crowded, busy but exciting islands & peninsula.

I was honestly surprised at us. In the past few years we’ve been travelling around Asia as much as possible. For our first few trips we tried site seeing & ultimately decided that it’s just not for us. Instead, we prefer to sit in local coffee shops, eat street food, try to meet local people & grocery shop.

The first thing Mr. FGK & I do when arriving in a new country is head to a local grocery store. It’s one of our favorite traditions. Since we live in a foreign country, we’ve learned how much fun it can be to compare the grocery stores of different countries.

“Oooh they have cilantro in Bali,” I have exclaimed jealously, and far too loudly. Cilantro is next to impossible to find in Korea.

“Man, look at the price of avocados here,” Mr. FGK will say with envy. Avocados ain’t cheap in the ROK (Republic of Korea).

The more we travel, the less we are excited by the tourist sites. And the less we are shocked or surprised by Asian things that we could never see at home. We no long drop our jaws to see an entire duck with its head still attached served to us for lunch or cringe at the sight of live octopus tentacles wriggling around on our plates. Rather we are excited by & googly eyed over the availability of our favorite foods in some countries & not in others.

However, Hong Kong is a country where the apartments & kitchens are small enough to justify more dining out than cooking in. So we weren’t made jealous by the grocery stores this time around. Instead, we decided to focus on site seeing.

Again, I am still surprised at us. The couple that spent 7 days in Bali last May mostly lazing about on the beach & having beers with the locals, were instead marching around the city snapping pictures of absolutely everything in sight. We would walk around all day looking at things, then realize we had forgotten to drink water & it was 90 degrees out. Still, I loved every minute of it!

Hong Kong was full of markets & skyscrapers & dim lit alleyways. So many of the old buildings looked like they were built one room at a time. The awnings above windows were rusted over with moss growing on them. The one in this picture below really captured my attention. It looks like it has so many stories to tell. 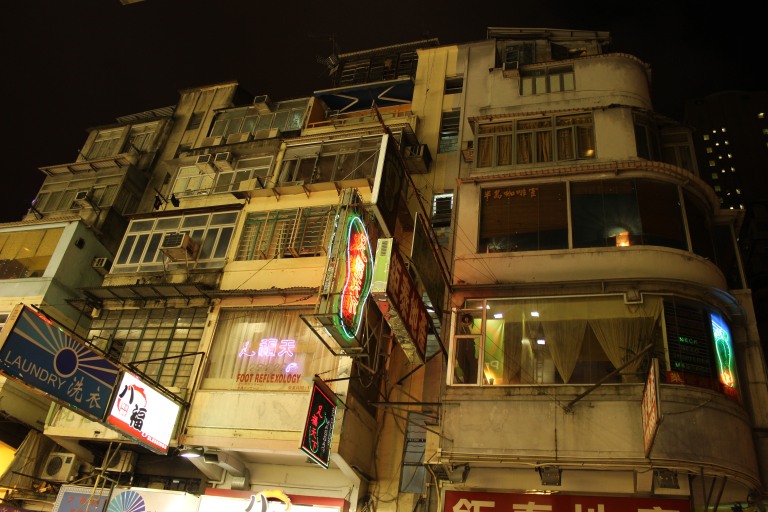 The sidewalks in Kowloon were always crowded, bustling & wet with the air con drippings from buildings above. Each new street seemed to have its own personality or rather, every couple of streets seemed to operate jointly on a theme.  It’s as if the people got together & decided, these 5 streets sell flowers but this street is only Thai food. And the big, long street, it’s where all the kitchen supplies can be bought. 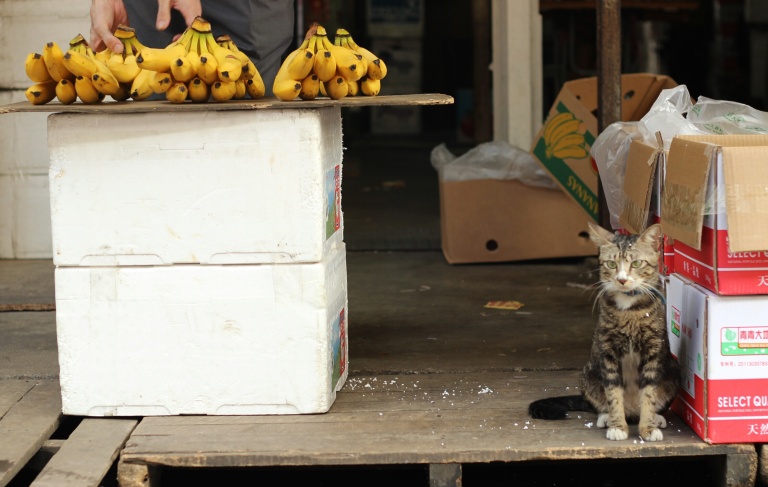 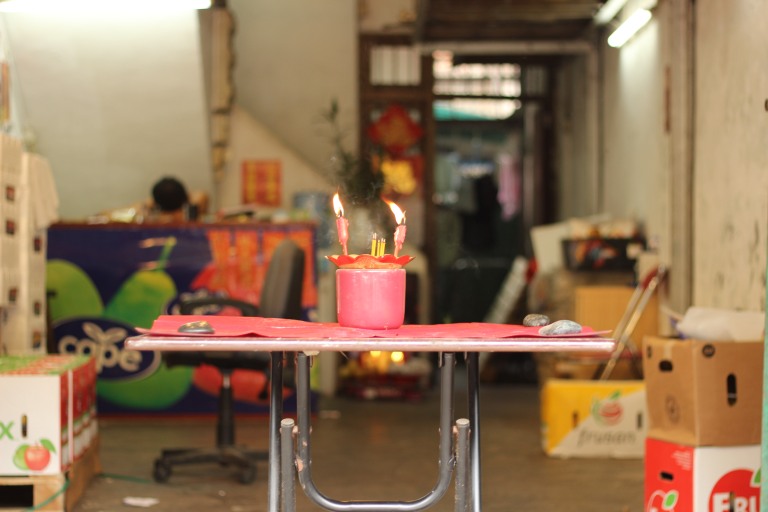 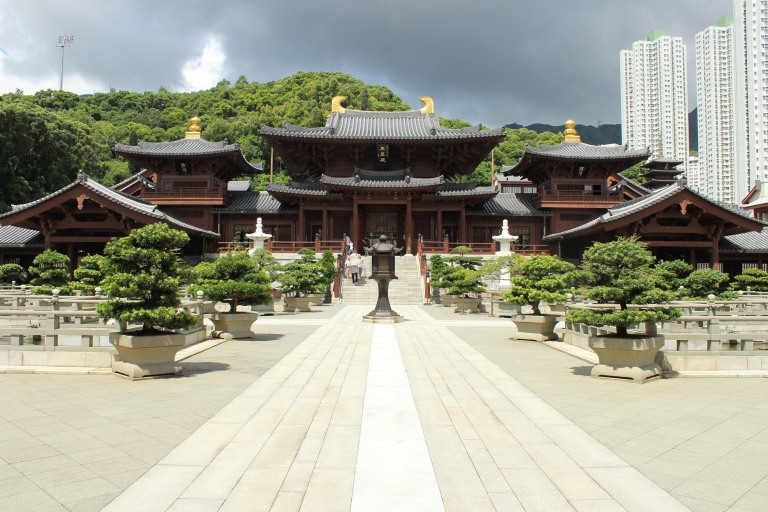 In Central, the streets were that of 5th Avenue, glittering designer names & shiny expensive things. The buildings towered over us & a nice gust of wind could be felt from all the cars passing through. The alleys were filled with colorful graffiti & shirtless old men playing Mahjong. There were hip coffee shops with patio seating & swanky bars every other building. Just streets away were traditional Chinese medicine shops with deer fetuses & ginseng in the windows. 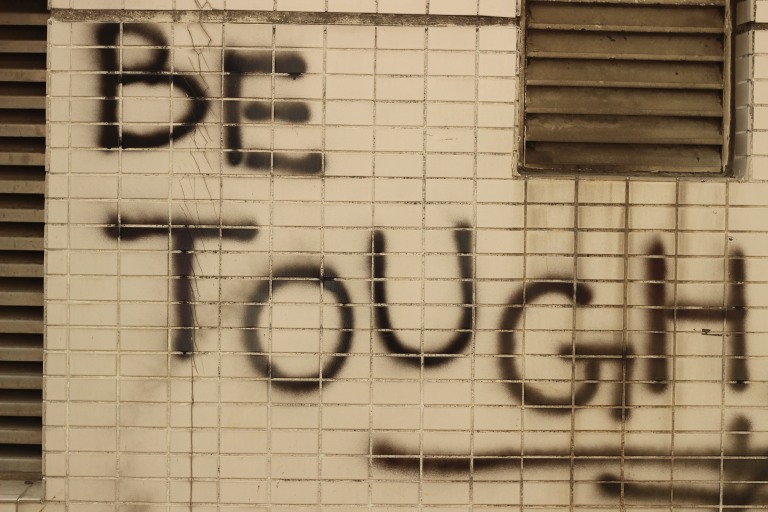 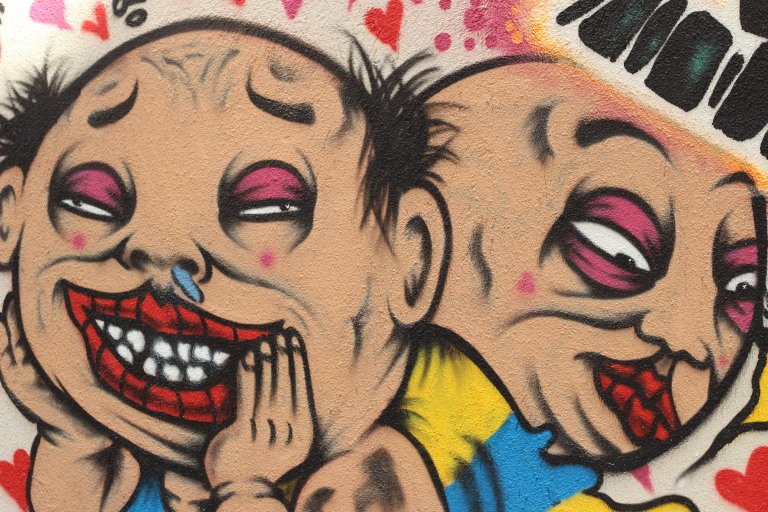 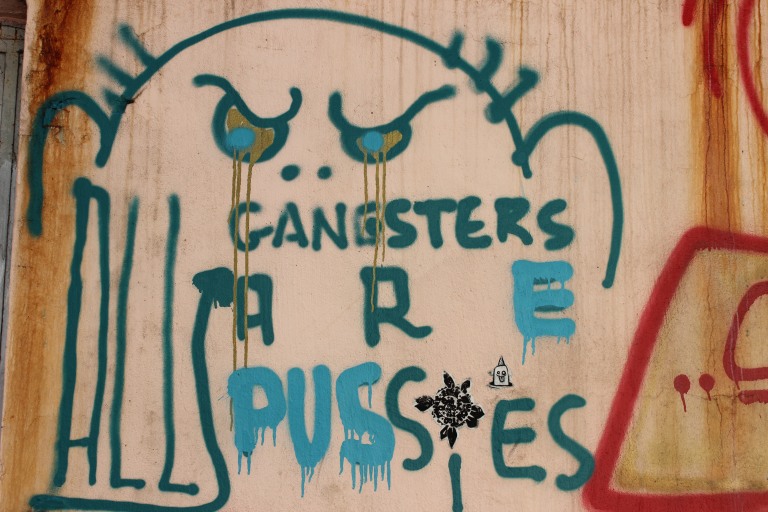 Lantau felt spacious & separate from it all. The streets were mostly quiet & surrounded by tropical plants covering every inch of untouched land. When we arrived at Tian Tan, the Big Buddha, the air was cool. We were at the top of the mountain, just beneath the clouds, with a view of the vast tropical landscape. It was serene & peaceful … well, except for all the touristing. Despite all the cameras clicking, mine included, the Buddha was an incredible site. 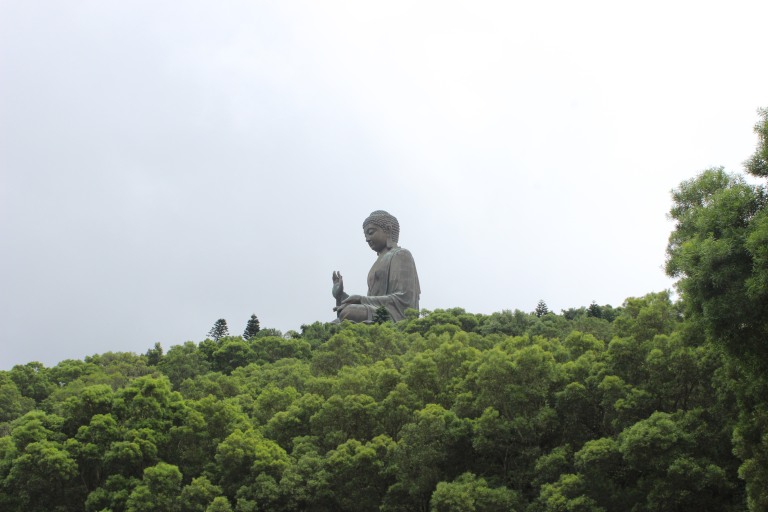 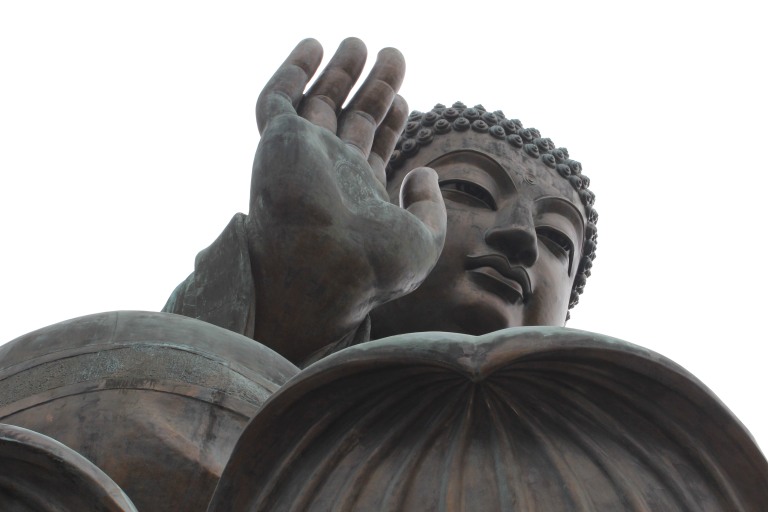 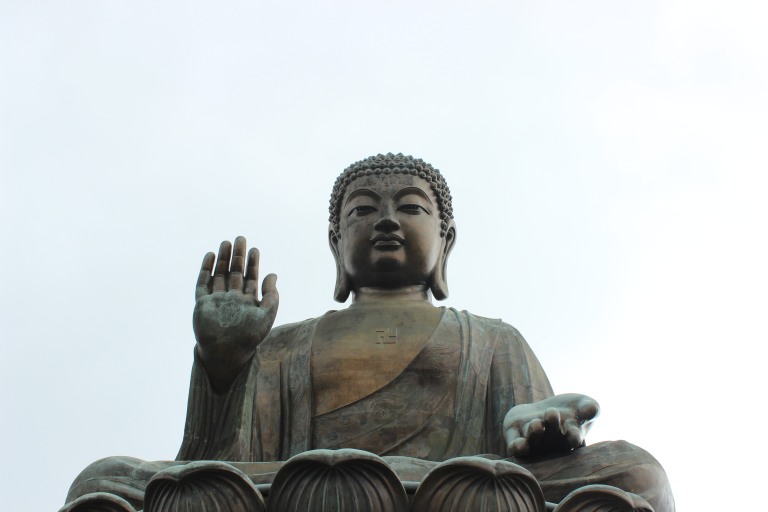 We were both so in love with it all! How could we not site see?